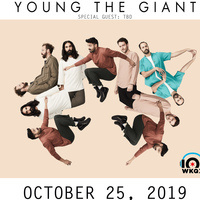 Young the Giant will make their debut at the NIU Convocation Center on Friday, October 25th !

The Convocation Center is excited to kick-off the Homecoming weekend with the American Rock band and presenting radio station 101WKQX. Doors will open at 6:00pm with the show starting at 7:00pm. Special guest will be announced at a later time.

The fourth album from Young the Giant, Mirror Master is a layered meditation on identity in modern life, an emotionally charged look at the dangers of illusion and possibilities of freedom.

Students with a valid NIU OneCard will receive $10 off per ticket (limit 2).

Tickets start at $32.50 and are a combination of reserve seating and general admission pit.  Tickets can be purchased at the NIU Convocation Center box office, all Ticketmaster Outlets, Ticketmaster.com, or by phone at 800-745-3000.