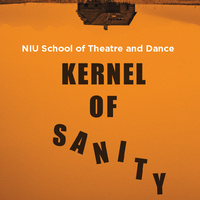 "Kernel of Sanity" - presented by NIU School of Theatre and Dance

On his way out to Los Angeles, Roger, a young black actor, stops in a Midwest town to visit Frank, an older white actor that once starred in a production of One Flew Over the Cuckoo’s Nest where Roger played a bit part. What transpires during this unlikely meeting is a mystery dealing with identity, sanity, and white privilege. Frazier’s play about marginalization was itself marginalized. The 1978 play languished without a professional production for years, only recently claiming its rightful place in the twentieth-century American canon. Its prescience against the backdrop of our ongoing racial reckoning is startling. The production is directed by SOTD alum Alys Dickerson and features a cast of third-year MFA actors.