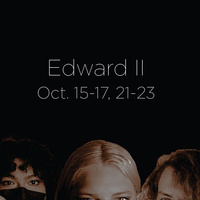 "Edward II" - presented by NIU School of Theatre and Dance

Edward II traces an imperfect monarch’s rise and fall. The court becomes obsessed with the King’s relationship with a male companion, inflaming political tribalism and hampering any chance at progress. Set in the not-too-distant future, against a backdrop of climate catastrophe and geopolitical turmoil, this new adaptation by director Frankie DiCiaccio explores how a deluge of ego, greed, and the violence of gender prescription may pull us all under. The waters are rising, but all eyes are on Edward’s bed.