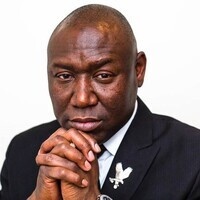 Ben Crump will be discussing a variety of topics such as rebuilding democracy, civil rights, law and the courts with Deans Robert Brinkmann and Cassandra Hill. A moderated question and answer session will follow.

This event is made possible with support from the College of Law, Center for Black Studies and the Delta Iota Chapter of Omega Psi Phi Fraternity, Inc.

Raised in the small city of Lumberton, North Carolina, by a single mother working as a hotel maid and in a Converse shoe factory, he witnessed the effects of slavery and racism firsthand. A first generation student, Crump earned his undergraduate degree at Florida State University and received his law degree from FSU College of Law.

Powered by the social mobility education provides and inspired by the legacy of Supreme Court Justice Thurgood Marshall, civil rights attorney Benjamin Crump has established himself as one of the nation’s foremost lawyers and advocates for social justice.

He has represented the families of George Floyd, Breonna Taylor, Ahmaud Arbery, Trayvon Martin, Michael Brown, Tamir Rice, Nakia Jones, Danny Ray Thomas and Stephon Clark, as well as the residents of Flint, Michigan. Crump also represented the descendants of Henrietta Lacks, whose cells were taken without her permission decades ago and are still being used for medical research today. [Lack’s story was chronicled in Rebecca Skloot’s 2010 book, The Immortal Life of Henrietta Lacks.]

His tireless advocacy has led to legislation preventing excessive force and developing implicit bias training and policies. He has been nationally recognized as the 2014 NNPA Newsmaker of the Year, The National Trial Lawyers Top 100 Lawyers, and Ebony Magazine Power 100 Most Influential African  Americans. In 2016, he was designated as an Honorary Fellow by the University of Pennsylvania College of Law.

Crump is the President of the National Civil Rights Trial Lawyers Association and currently serves on the Innocence Project Board of Directors. He is the founder and director of the Benjamin Crump Social Justice Institute.

Among dozens of accomplishments, he has been recognized with the NAACP Thurgood Marshall Award, the SCLC Martin Luther King Servant Leader Award, the American Association for Justice Johnnie Cochran Award, and the Alpha Kappa Alpha Eleanor Roosevelt Medallion for Service.

Advanced registration is required.  Go to http://go.niu.edu/Rebuilding-Democracy-RSVP to request a link to the event prior to Sept. 22. Event links will be sent out from the clas-communication@niu.edu mailbox one day prior to the event.