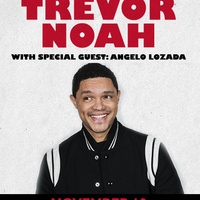 Trevor Noah’s rescheduled show at the Convocation Center scheduled for Sunday, December 9th is one of the shows that will be postponed until 2019. Please see Trevor Noah's Message Here. An announcement will be made ASAP when a rescheduled date is confirmed.

Once again, refunds will be granted once a new date is confirmed and announced.

We apologize for any inconvenience this may cause and thank you to all ticket purchasers for your patience and understanding. Please email convocenter@niu.edu or call 815-752-6800 with any questions or concerns. The Convocation Center box office hours are 9:00am -5:00 PM on weekdays.

We at the Convo wish Trevor all the best in his journey to getting better and we can’t wait to host a healthy Trevor Noah in 2019!

Due to illness, our Trevor Noah show at the NIU Convocation Center scheduled for Saturday, November 10th, has been rescheduled to Sunday, December 9th. All tickets for the original show date will be honored. Show times and seats will remain the same for existing ticket buyers.

We apologize for any inconvenience this may cause and thank all ticket purchasers for their patience and understanding. Please email convocenter@niu.edu or call 815-752-6800 with any questions or concerns. The Convocation Center box office hours are 9:00am -5:00 PM on weekdays.

Join us at the Convocation Center for a night of laughter with Trevor Noah on Saturday, November 10, 2018.  Doors will open at 6:00pm with the show starting at 7:00pm. Special guest includes a writer for the today show Angelo Lozada.

Tickets for Trevor Noah go on sale Friday, September 7th at 10:00am. Tickets start at $25.00 and are reserved seats. Tickets can be purchased at the NIU Convocation Center box office, all Ticketmaster Outlets, Ticketmaster.com, or by phone at 800-745-3000. NIU Students may buy their tickets in advance starting Wednesday, September 5th at 10am with a valid NIU OneCard at the Convocation Center box office (limit 4).

Trevor Noah is the most successful African comedian and the host of the Emmy® and Peabody® Award-winning “The Daily Show” on Comedy Central. This year “The Daily Show” has been nominated for a Writers Guild Award (Comedy/Variety Series). Noah joined “The Daily Show with Jon Stewart” in 2014 as a contributor.

Noah debuted his 9th new comedy special “Afraid of the Dark” in February 2017 on Netflix. The special was shot before a packed house in New York City at the Beacon Theatre on November 5, 2016. Last year, Noah debuted his one-hour stand-up special, Trevor Noah: Lost in Translation, on Comedy Central. Noah was the subject of David Paul Meyer's award-winning documentary film You Laugh But It's True which tells the story of his remarkable career in post-apartheid South Africa. His Showtime comedy special, Trevor Noah: African American premiered in 2013. He was nominated for "Personality of the Year" at the 2014 and 2015 MTV Africa Music Awards and won the award in 2015. Trevor's success has also spanned to sold out shows over 5 continents.