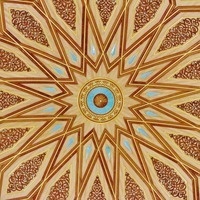 In spite of the many approaches that dealt with the musical maqām as practiced in Egypt and the Levant during the twentieth century, the maqām for the so-called "west" and so-called "east", remained a "magical" subject, with what all the word "magic" could imply.  In practice, the rules of the maqām are obvious, while in theory, it suddenly joins the incense burners and the myths and demons of the East, thus depriving us of understanding its invented intricacies. In addition,  a new approach to the maqām is introduced, far from all tiring and useless centesimal/infinitesimal measurements of its intervals.  This approach opens up to spaces of musical expression in other musical traditions, to show the universality of intervals and musical scales meaning.

Dr. Amer AI Didi received his PhD in Musicology from Sorbonne University, Paris. He is a specialist of maqâm history and theory. He has taught at the American University of Sharjah in the United Arab Emirates, and Antonine University, Lebanon.

Arts and Culture, Music and Concerts