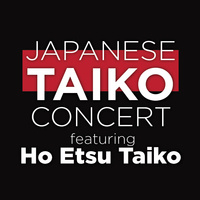 This high-energy concert will kick off NIU’s celebration for the World Music Festival this year. Ho Etsu Taiko is a collective of musicians with a fresh take on the art of Japanese drumming. Their music blends the culture of Japanese-American taiko with influences that celebrate the diversity of their ensemble. Ho Etsu Taiko will collaborate with NIU musicians to showcase the depth and breadth of taiko music.

Funding for this event was made possible through the Asian American Resource Center.

Arts and Culture, Music and Concerts