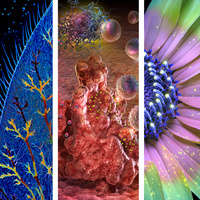 The IMAGES from SCIENCE exhibition series is a collaborative experiment that initially began in 2002 at Rochester Institute of Technology. Its objectives are to explore the boundaries of what is possible using the Internet as its primary voice to identify the world’s most striking images – originally produced to chronicle science in new and beautiful ways. Unlike the first two exhibitions that traveled the world, IMAGES from SCIENCE 3 includes both still and moving pictures but also animations and illustrations.

Rochester Institute of Technology Professors Michael Peres, Bob Rose, Chris Jackson, and Ted Kinsman, and Johns Hopkins University School of Medicine Professor Norman Barker are passionate about scientific images. They have enjoyed long careers as photographers and designers, but also as authors, educators, and industry leaders. Because of their interests in science images, they collaborated to produce the third traveling exhibition sharing some of the world’s most extraordinary images and image-makers who explore science as a subject.

Exhibition organized and traveled by the School of Photographic Arts and Sciences at Rochester Institute of Technology and Johns Hopkins University and School of Medicine.