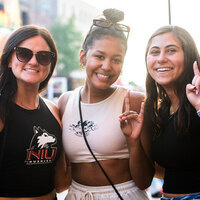 Local fans, students, faculty, staff and alumni are invited to join the Huskies for a down home celebration in downtown DeKalb.

The Huskie Homecoming Block Party has something for everyone. Kids' activities, a car show, #HuskiePride contests, delicious food options from downtown restaurants, beverages from Byers Brewery and Keg and Kernel, music, and of course Huskies!

The celebration will be concentrated on Second Street from Locust to Lincoln Highway, but stores and restaurants throughout downtown will be open later with activities and specials.

You won’t want to the miss the March of Huskies lead by NIU President Lisa Freeman, NIU Football Coach Thomas Hammock, DeKalb Mayor Cohen Barnes, and of course Mission and Victor E.  Spectators are encouraged to line Locust and Second Street as the NIU Marching Band, NIU student organizations, alumni and community supporters March in the Huskies. The procession will end at Palmer Court with a good old fashioned #HuskiePride rally.  Coach Hammock and crew will get us fired up for the festivities and your favorite local Huskies fans will lead us in the NIU fight song.

Then it is on to the Street Dance Party including DeKalb’s Largest Street Line Dance. NIU Athletes and coaches will be on hand to sign autographs and take pictures at the Egyptian Theatre. It’s a night of celebration in downtown DeKalb you won’t want to miss.