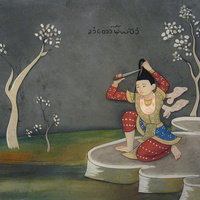 Austin-based artist Judy Jensen first visited Mae Hong Son in 2000.  She was drawn by a brief mention in a guidebook about 19th-century Wat Chong Klang, which houses a collection of 180 Burmese reverse paintings on glass.  Enamored with the paintings, each depicting tales of the Buddha’s life and his previous incarnations, Jensen returned 5 years later. To her dismay, a number of the paintings had been either irreparably damaged or destroyed by the December 2004 earthquake.

Jensen’s professional artistic process specialization is reverse painting on glass. Since late 2012, Jensen has been making new glass paintings for the temple, delivering and donating them to replace those destroyed. Jensen will be discussing the touching and remarkable events that have propelled her undertaking, as well as the rewarding spiritual and artistic challenges involved.

A U.S. National Endowment for the Arts Fellowship Grant recipient, her works are in numerous public and private collections, including Canada's Royal Ontario Museum, the Smithsonian American Art Museum, the Los Angeles County Museum of Art, McDonald’s Corporate Art Collection, Austin/Bergstrom International Airport and the Washington Art Consortium. Her most recent honors are a grant from the James H. W. Thompson Foundation in Bangkok, and her designation by the City of Austin as Creative Ambassador to Thailand.   Her lectures about the project included Bangkok National Museum, The Siam Society in Bangkok, and The Crow Collection of Asian Art in Dallas.