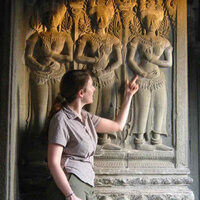 Title: “Woman Between Two Kingdoms: Dara Rasami and the Making of Modern Thailand”

Leslie Castro-Woodhouse has been studying Asian cultures and histories since a 1987 service-learning stint in northeastern Thailand. She completed her PhD in Asian History at UC Berkeley in 2009, specializing in 19th to early-20th-century Thailand, particularly its northern region. She has published several articles featuring her research on central and northern Thai women, photography, and culture. Her first book has just been published by Cornell University Press. Her book talk at NIU will present Woman between Two Kingdoms, which explores the story of Dara Rasami, one of 153 wives of King Chulalongkorn of Siam in Thailand during the late nineteenth and early twentieth centuries. Born in a kingdom called Lan Na, Dara served as both hostage and diplomat for her family and nation. Dara Rasami's story provides a fresh perspective on both the socio-political roles played by Siamese palace women, and how Siam responded to the intense imperialist pressures it faced in the late nineteenth century.

This lecture is sponsored by the Thai Teaching and Research Fund at NIU.