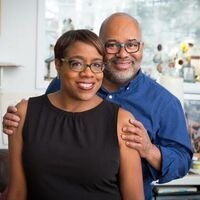 A Book, A Page, A World: The Artistic Journey of Lesa Cline-Ransome and James E. Ransome

Collaborators in life and work, Lesa Cline-Ransome and James E. Ransome share their early beginnings as author and illustrator, the creative process from idea to revision and how they navigate the business and art of writing and illustrating books for children.

Illustrator of over 60 books, James E. Ransome has been named by the Children’s Book Council as one of 75 authors and illustrators everyone should know. Ransome has also received several Coretta Scott Honors for many of his other books as well as The Simon Wiesenthal Museum of Tolerance award, the NAACP Image Award for Illustration and is an ALA Notable Book recipient.

Lesa Cline-Ransome is the award-winning author of many critically acclaimed books for young readers, including "Not Playing By the Rules: 21 Female Athletes Who Changed Sports," "Young Pele: Soccer’s First Star," "Before She was Harriet," "Overground Railroad," and "Game Changers: The Story of Venus and Serena Williams." Her numerous honors include the Jane Addams Honor Award, the Christopher Award, Kirkus Best Book of the Year, School Library Journal Best Book of Year and three NAACP Image Award nominations.